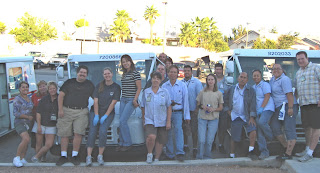 Rural Carriers and Associates at Summerlin Station, NV, decided to spend some time tidying up on two Fridays in October.


At a QWL meeting, the unsanitary, unsafe and unsightly condition of LLV's was discussed. So they decided to do something about it.


Volunteers showed up at 6:30, before the work day began for some of them, and they cleaned out the rural LLV's and vans. Sweeping and cleaning windows inside and out. Then they decided to extend the cleanup and did the city side LLV's and vans as well!


What industry! What teamwork! What sharing!
"As often as we do good, we sacrifice." ~ Ben Franklin

What a great contribution!!! Thanks to all Volunteers for their time and hard work. It is a good example for other employees.