Oh to be retired

The Retirees’ Breakfast must go on! 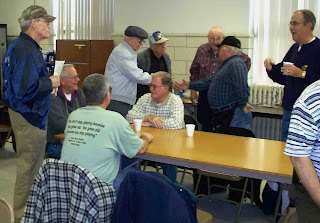 Faced with having to cancel the annual event due to budget constraints, Topeka, KS, employees found a way to keep the tradition alive.

"This event has special meaning for us," said Postmaster B. Steven Pinkerton. "Thankfully, none of us is above begging! Our local Social and Rec committee contributed the majority of the funding, and donations from our current employees made up for the balance."

Approximately 50 grateful postal retirees attended the breakfast. Topeka employees past and present enjoyed the opportunity to mix and mingle. New friendships were made and relationships strengthened.

"The breakfast is great. It gives us time to come together and renew old acquaintances," said former City Carrier Paul Rodgers, who retired in 2006.

"This was my first time coming and it has been very enjoyable" said former Tecumseh, KS, Postmaster Waldean Miller, a 1993 retiree.

Former City Carrier Ernie Alexander, a 1985 retiree, summed up the event in one word – "Great!"

"I love the breakfast and this celebration has given me an opportunity to meet different retirees along with the retirees that I already know," said former City Carrier Bob VanDruff, postal class of 2006.
"Thanks for another great get-together for the retirees," said former City Carrier Jim Hinton, who retired in 2002. "I'm sure that if next year you have to charge a fee, everyone would still show up. You guys out did yourselves again this year."

"I am very fortunate to work with the entire Topeka team, and that includes our retirees," said Pinkerton.
Below is a picture of Topeka Postmaster B. Steven Pinkerton (l) visiting with with former Ulysses, KS, Postmaster Bill Miller, who retired in 1985. 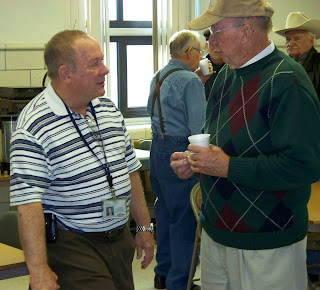