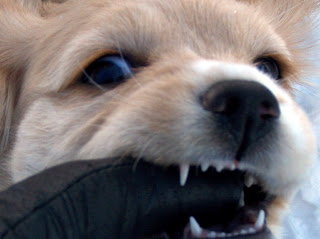 Dog season is almost upon us.

In 2008, Denmark’s national postal service handed out more than 25 tons of dog treats to its postal workers to help them battle bad dogs intent on taking a bite out of them while delivering the mail.

More than 3,000 boxes of doggie treats were given to Danish carriers last year to try and pacify vicious dogs. But, this didn't work. Last year, 335 Post Danmark delivery workers were bitten by dogs, resulting in 45 of them taking extended sick leave as they recuperated.

The Copenhagen Post reports that the Animal Protection Society, the Danish Kennel Club, and Post Danmark collaborated in 2008 to come up with a viable solution for dealing with vicious dogs. They produced a video explaining how best to deal with angry dogs in an effort to educate postal workers who are in the field.

As a reminder, back here in America. , The United States Postal Service policy is to never give dogs treats.

I give my dogs treats. It works for me but they are not vicious dogs.