The Sunday Funnies stamps to be released later this year will feature stamps that depict Beetle Bailey, Dennis the Menace, Calvin and Hobbes, Garfield, Archie

But diehard fans are sad that their their favorite comic strip didnt make the cut. Supporters of Doonesbury, Far Side, Dilbert, and For Better or Worse wish they had a stamp for their comic strip, too. 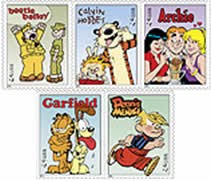 In 1995, the Postal Service issued a  “Comic Strip Classics” collection in 1995 that hailed such old timers as Snoopy, Little Orphan Annie, Dick Tracy and Blondie.

What's your favorite comic strip character and why do you think it should get a stamp?

The Far Side definitely. Although when I see stories like these I always wonder if there aren't difficulties getting the rights to some of the potential subjects.

I agree with one article I read that questioned "Archie" as I don't remember it in the newspaper comics but as a comic book. I would vote for "Doonesbury" and "Bloom County." I love Garfield but I'd like to see Bucky and Satchel from "Get Fuzzy." With so much interest in this subject maybe the Comic stamps could become an annual issue like the Disney and Warner Bros. were.

The Far Side and Maxine

(3)thums up for the "FarSide"
My next choices would be
1.Shoe
2.Hagar the Horrible
3.Wizard of ID