Alan Shepard, the first American astronaut to fly into space, will be on a U.S. postage stamp next year.

The stamp called, "Alan Shepard: First American in Space," shows Shepard centered between images of his rocket lifting off and his capsule above the Earth.

A second stamp, "First Spacecraft to Orbit Mercury"  will show the Messenger spacecraft and the planet with a starry sky in the background. 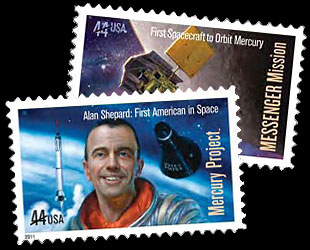 The stamps should be available this Spring.
These are the first space-themed stamps in more than a decade. What do you think about space stamps? Good sellers? Comment here.

I think the space stamps are a very good idea. I remember sitting in History class, following Shepard's flight, because it was so historic, and everyone was enthralled with the concept of exploring what would later become known as "the Final Frontier."

Space stamps are always very well received by my international correspondents. I'm excited about these two new releases because I am completely out of my vintage space stamps. Do you remember the space se-tenants? Those are my absolute favorites.

I love them! Want more? I get stamps from: "Murph" He sells older US stamps at face value + shipping. If you want a theme he'll select them for you. I just ordered another batch.

I have a number of space stamps that I use, all from Murph: space shuttle, Skylab, Apollo-Soyuz, Pioneer-Jupiter, and Mariner 10 - Venus/Mercury. And panes of stamps-- the pane of 6 below the Centennial stamps on your link).

Space travel is part of our culture and the International Space Station would not have been realized without the U.S. I think the space stamps have provided a unique glimpse into our heritage as well as reminded us how far we have come. Indeed, they even inspire us to look ahead to our next accomplishments.

Why didn't the Postal Service come out with a stamp to honor the Challenger astronauts this January?

Absolutely Love Them.. I know quite a few "star gazers" that will definetly buy some quantity of these beautiful stamps.. including myself !!