(In case you missed the LiteBlue article, it's reprinted below)
Four years ago, the Postal Service launched an out-of-this-world promotion.
In collaboration with Lucas Films, the Postal Service promoted stamps commemorating the 30th anniversary of “Star Wars” by transforming 400 collection boxes into R2-D2 look-alikes — one of the film’s most beloved characters.
The R2-D2 boxes replaced high-volume mailboxes in 200 cities nationwide on March 16, 2007. People were excited to see the hard-working droid accept customers’ mail just like any other collection box, if only until April of 2007, when, the Postal Service began removing the collection boxes. But R2-D2’s service was far from over.
The Postal Service donated the boxes to the military. Now, the R2-D2 look-alikes are collecting mail from troops deployed around the world, from the Marine Corps Air Station in , , to Mildenhall Air Base, , to locations in and .
“They will stand guard in front of Post Offices and base exchanges, collecting mail and hopefully bringing a smile to our troops who are far away from home and serving their country,” said Lt. Col. Gordon Geison, commander of the Joint Military Postal Activity Pacific in 2007.
Excluding military bases, only a few of the boxes remained in the and none are allowed to be displayed outdoors with one exception — — a town famous for its extraterrestrial connections. 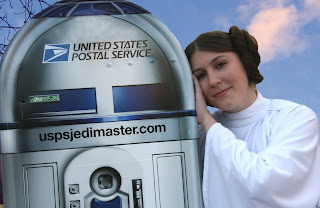 “The box is located in front of the Roswell Convention and Civic Center, said Renee Roach, Roswell marketing director. “We absolutely love it.”
Another R2-D2 box is located in the in . This box includes a plaque bearing the USPS and “Star Wars” logos and is signed by former PMG Jack Potter and George Lucas, the only box with the Star Wars director’s autograph.
Click here to see images of the R2-D2 boxes. Click here for more information about the R2-D2 collection boxes

may the force (still) be with us!

As I recall.....I thought we were mandated NOT to keep anything associated with this add campaign. We were instructed not to keep any of the posters or advertising material. How is it that they were allowed to keep and use this material?