There. I fixed it.

What kinds of mailbox fixes have you seen? Tape, string, and various implements keep America's boxes together.
Here's one shared with us from Linda Fannin-Church, who blogs at uglymailbox.dom 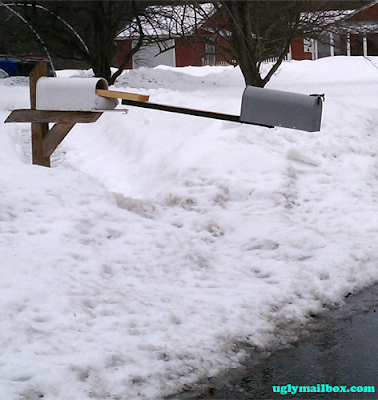 Is writing more letters the answer?

At the Senate Homeland Security and Governmental Affairs Committee meeting two weeks ago, there were plenty of suggestions about how to get us back on good financial footing.

In order to make us $1 billion, American's would have to write about 2.2 billion letters -- that's 8 for each and every man, woman and child.

To pay all of our obligations, it would take about 70 additional letters per person a year.

Is her suggestion and a campaign worth pursuing?

Bill Gates on the Postal Service

In his book The Road Ahead, written in 1995, Microsoft Founder Bill Gates wrote:

The computer was our toy. We grew up with it. And when we grew up, we brought our toy with us. Now the computer is in our homes and in our offices. It has changed our lives and it is changing them again, because now the computers are coming together to make a new system. In this system, computers all over the world are beginning to work together. Our computers will be our telephones, our post office, our library, and our banks.

What do you think about his prophetic words? Comment here.
20 comments:

It used to be the only way a person could get a stamp was to be -- well -- not around anymore.
For a long time, to be on a stamp, a person had to deceased for ten years. Later it was changed to five years.
As announced today, living subjects can be put on stamps.  Soon, musicians, sports stars, writers and artists will adorn stamps.
Two questions
1 - Do you think this a good idea?
2 - Who would you put on a stamp?
Comment here.
You can submit the top five living people you would like to see on a stamp to the Postal Service. Send ideas via Facebook (facebook.com/USPSStamps) and Twitter (@USPSStamps)
26 comments:

Your Postal Podcast: Postmaster makes his pitch to the Big Leagues

He pitches mail into boxes by day, and pitches warm up to Phillies sluggers by night. He's Rob Potts and he leads off this month’s edition of Your Postal Podcast. ﻿
You’ll also hear some facts and myths about the history of the legendary Pony Express, and a roundup of the latest postal headlines.
The show, available at YourPostalPodcast.com, also features a roundup of the latest Postal Service news.
For a transcript of the latest program, please click here. If you’ve missed previous editions, you’ll find a two-year archive at the Your Postal Podcast website. Shows can also be downloaded free at the iTunes Store.
Please click here to share your comments or ideas for future podcasts.
1 comment:

Sen. Carper suggested that Congress give the Postal Service to means to "give more incentives for employees to retire."

What do you think this means? What would it take? Comment here.
46 comments:

Three months to figure it out

According to Federal Times, a short-term House spending bill would delay the $5.5 billion payment for health care retirees for 90 days.
The continuing resolution would give lawmakers a chance to sort out the various  proposals and come up with a solution.
What do you think about this? Is it a good idea? What would you do?
11 comments:

Without being political, what do you think about this? Will it help? Comment here.


According to Reuters and the Washington Post, the administration has submitted a plan designed to help put the Postal Service back on firm foot.

The plan went to the congressional “Joint Select Committee on Deficit Reduction.”

"Bold action is needed to ensure that USPS can continue to operate in the short run and achieve viability in the long run,” said President Obama in his message to the committee. “The Administration recognizes the enormous value of the Postal Service to the nation’s commerce and communications, as well as the urgent need to reform to ensure its future viability.”

·         Provide USPS over a two-year period a refund of the $6.9 billion in surplus funds it has contributed to the Federal Employee Retirement System.

·         Reduce the Postal Service’s operating costs by granting authority to reduce mail delivery from six to five days per week.

What do you mean, "default?"

Some have wrongly concluded (like this Public Radio article) this to mean the USPS is going out of business, shutting down and won't deliver mail.

Postmaster General Donahoe cleared the air to the Senate Commitee last week. "Without legislative change this year, the Postal Service faces default, as available liquidity at the end of this month will be insufficient to meet our financial obligations."

A postal spokesman said  that default on the payment wouldn't affect mail delivery or postal operations. He said this, "We will continue to deliver the mail as we have for more than 200 years. ."

What are you coworkers and customers saying? Is there confusion over the word, "default?"

In a major announcement, the Postal Service today unveiled big changes in the way we handle mail.

Proposals under consideration include studying nearly 250 processing facilities for possible consolidation or closure, reducing mail processing equipment by as much as 50 percent, dramatically decreasing the nationwide transportation network, adjusting the workforce size by as many as 35,000 positions, and revising service standards for First-Class Mail.

The reason? Mail volume has declined by more than 43 billion pieces in the past 5 years and is continuing to decline. First-Class Mail has dropped 25 percent and single piece First-Class Mail — letters bearing postage stamps — has declined 36 percent in the same timeframe, and nearly 50 percent in the past ten years. The decline has created substantial excess capacity within the postal processing network

The entire list of affected facilites can be found  here.

Got an opinion?
16 comments:

Have you noticed the news lately? We're everywhere and suddenly everyone is talking about us.

It's all the talk about layoffs, defaults and postal finances.

We've been the subject of thousands of news articles and hundreds of editorials.

The Postmaster General has had more than 50 interviews with major media outlets like the New York Times, Washington Post and Time Magazine. Tonight, he's appearing on the O'Reilly Factor.

Is all of this working? Are your neighbors, friends and customers getting the picture about the Postal Service and what is their reaction?  What do you think? Comment here.
20 comments:

The Postmaster General's Congressional testimony in front of the Senate Homeland Security and Governmental Affairs Committee got plenty of press earlier this week.
In case you missed it, the National Journal summarized PMG Donahoe's plans to save money:
Cuts in processing (by 2015)
Cuts in mail delivery (by 2015)
Changes in service
Changes in labor agreements
What do you think about these? Comment here.
21 comments:

Finally, Hawaiian shirts get some respect!

The U.S. Postal Service unveiled five aloha shirt postcard stamps that will be available next year.
Two of the five shirts depicted in the stamp art showcase surfers and their boards; one shows fossil fish, shells, and sea stars; another shows the bird of paradise flower; and one shows volcano.
What do you think about these stamps? Comment here.

It's okay to laugh a little -- even if it hurts

There's been plenty of bad news lately. So maybe we can laugh a little at ourselves. David Letterman's famous Top 10 list last night focused on the Postal Service. Here are his,

10
Change name to UPS
9
Invent a stamp that licks back
8
Add wacky sound effects for mailboxes
7
Alter mail trucks to look like Millennium Falcon from "Star Wars"
6
If your letter isn't delivered in 30 minutes or less, it's free
5
Bedazzled uniforms
4
New hit reality show: "Real Mailmen of New Jersey"
3
Customers can now pay with gas or grass
2
Take the Packers and give three and a half tomorrow night
1
Ten cent surcharge to deliver my hate mail — you'll

Quad City Processing and Distribution clerk Julia Belmonte came home after her shift. A few doors down, she saw smoke. The smoke led to a duplex, where there was a fire.
Although she was pregnant herself, Julia banged on the doors downstairs. No one was home. Then she climbed the stairs and pounded on the door, where a family of six was fast asleep.
They quickly escaped the duplex as it became engulfed with smoke and flames.
And another postal hero is born!
Care to comment?
9 comments:

Letter Carrier is a also Olympian

Salina, KS, Letter Carrier Rhonda Lindstedt took home two medals from  her participation in the Senior Olympics in in June.
Her basketball and softball teams placed second and third nationally. She also won numerous track events in the  competition, but decided to play team sports instead of individual sports.
The 58-year old added these medals to the seven she won last year.
She has six grandchildren.
3 comments:

Your Postal Blog and the QR Code

You're seeing them in advertisments and in printed material. What in the world are they? Random lines, computer generated all in a box.

It's called a QR code -- short for Quick Response. Smart Phones with cameras can download a special application. If you take a photo of the code, it will take you directly to the web page.

What it does for mailers is connect their printed mailed items to their online store.
It allows our customers to have both an online and a print catalog presence.
And, not to be left behind, here's the Your Postal Blog QR code.

If you have a smartphone, try it out!  Care to comment?

What do you think?
10 comments:

Regarded as the purest hitter in baseball, he's the last to carry a batting average over .400.
He hit .344 over his 19-year career. 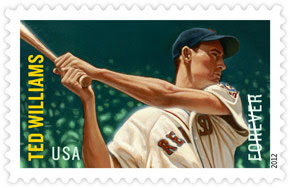 The Williams stamp is the last of the 2012 stamp program featured on social media websites. Check out Facebook, Beyond the Perf and Twitter for more information.
2 comments: