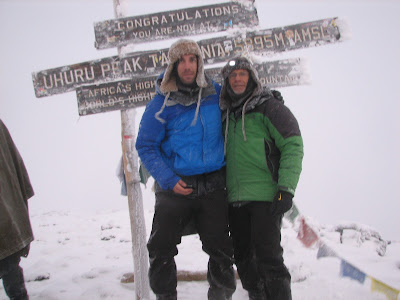 Doug Rhoades, a USPS Logistics & Distribution Specialist in Phoenix, AZ, made a goal to conquer Mount Kilimanjaro. He planned to make the climb in July 2011 to honor the passing of his mother who had lung cancer. Unfortunately, his plans went awry when he was diagnosed with stage 3 lung cancer himself.

In March 2011 he started 12 weeks of chemotherapy and radiation treatment. Once his treatment was complete he could only walk small amounts of time, but he began training again and eventually built up his strength. In October 2011, with his son Josh by his side, he achieved his goal placing a photo of his mother at the summit sign.

Congrats on your goal and good health from here on in :)