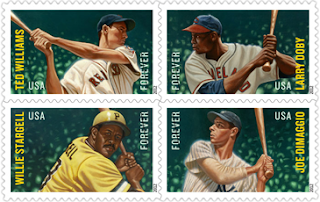 Today, the Postal Service salutes Joe DiMaggio, Larry Doby, Willie Stargell, and Ted Williams. Each of these National Baseball Hall of Famers was a perennial All-Star selection and left an indelible impression on the game.

Joe DiMaggio (1914-1999) led the New York Yankees to ten pennants and nine World Series titles. Many consider him the greatest all-around player of his time.

Ted Williams (1918-2002) of the Boston Red Sox was the last Major League player to bat over .400 for a single season (1941). During his stellar career, he won six American League batting titles and four home run titles. Today, “the Kid” is regarded as one of the all-time greatest hitters in Major League Baseball history.

Larry Doby (1923-2003) was the first African American to play in the American League, joining the Cleveland Indians shortly after Jackie Robinson broke the color barrier in the National League. He faced prejudice with dignity and courage.

Willie Stargell (1940-2001) powered the 1979 Pittsburgh Pirates, a multicultural team known as “The Family,” to a World Series title. He is also remembered for promoting harmony between players from different backgrounds.

The Major League Baseball All-Stars stamps are being issued as Forever® stamps. Forever stamps are always equal in value to the current First-Class Mail one-ounce rate.