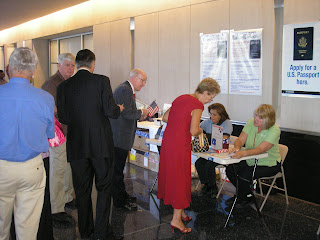 Passport fairs are regularly held in conjunction with swearing-in ceremonies for new citizens at the Federal District Court in Las Vegas.

USPS partnered with the Social Security Office and the Clark County Voter Registration Office to create a one-stop-shop for new citizens.

These customers need a social security card, voter registration and passports. Why not do it all at once?

Delivering such service brings in the revenue. And getting multiple agencies to work together for the common good is a Benny kind of idea!