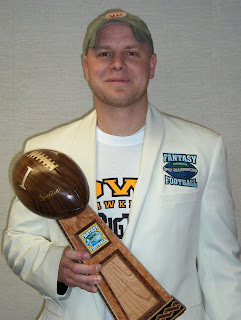 Now I've been known to be a great competitor, having invented or played a number of games and contests in my day, so I want to congratulate Loveland, CO, Rural Carrier Associate Shane Schroeder.

Recently, Schroeder, who's worked part-time for three years as a rural carrier associate, won $1 million dollars as the national champ of a fantasy football contest. He beat out more than 7,000 other competitors from across the nation after playing a ten week season and the playoffs with other top scorers.
Shane won an all-expenses paid free trip to Las Vegas just before Christmas where he was honored at the Bellagio Hotel by the contest sponsors and press. Schroeder was presented as the national Fantasy Football winner by former NFL great Jerry Rice.
Besides his million dollar winnings, Schroeder received a Fantasy Football jacket and champion trophy as seen in this photo.
Asked about his fabulous football feat, the humble Schroeder - who also works full-time as a youth corrections officer - said "it was awesome. I plan to help out my parents with the money, pay some bills and invest the rest. And I plan to keep working both my jobs. I like working for the Post Office."
He's a winner at work too. One of his supervisors, Loveland Customer Services Manager J.R. Mcentee said, "Shane does a great job for us, is a hard worker, and is well-liked by everyone. It couldn't have happened to a better guy."