According to Beyond the Perf, the Lunar New Year series has far exceeded expectations. 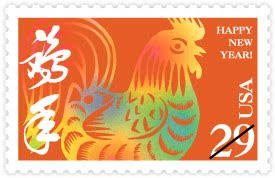 It all began in 1992 with the release of a Happy New Year!  that stamp celebrated the Year of the Rooster in the traditional Chinese calendar.

USPS sold more than 300,000 stamps in New York City and more than 2 million in San Francisco in just a few weeks.

That's nothing to cluck at.

So, ever since, we have been issuing stamps to coincide with other years in the Chinese calendar: Year of the Dog,  Boar, Rat, Ox, Tiger, Rabbit, Dragon, Snake, Horse, Ram and Monkey. See the slide show of the stamps here.

Once the series ended, it progressed to a new series, Lunar New Year. This year's stamp is the beautiful narcissus inspired version of the Year of the Tiger. 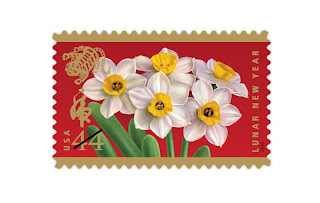 To see the artist's process for producing the stamp, click here.

If they are so great(& I do like them),why are they not producing them any longer-my customers are not happy!

They are beautiful! There wasn't a pretty flower stamp all last year :(
My customers are using these on their valentine cards. Last year was the worst ever year for stamps,in my opinion. There always needs to be a flower sheet or book available for customers year around. You know card senders are picky!

I loved them all. This year's is especially beautiful. I, too, used it on my valentines, since this year's love stamp wasn't issued in time.

The article showing how these stamps were designed was interesting. These are some of the prettiest stamps we have this year. I did however have a "narrow minded" customer that liked them, then she saw the Lunar New Year on the sheet and asked what that was. When I explained, she said "Oh, I don't want them then." You get all kinds at the retail counter. If we issued stamps with just "44c" on it and nothing else I'm sure someone wouldn't like the color or the way the number was printed.

I've really enjoyed all the Lunar New Year designs, but this year's is by far the best. It has striking, bold colors, beautiful narcissus flowers, and the shiny gold border that reflects light. Fabulous!