Snail mail. What do you think about the term?

Benny here. Something's been bugging me lately. It's the term "snail mail." From where I sit, I think we do a pretty good job of moving the mail. While can't compete with instantaneous sending and receiving, we've never been quicker.
But really, snail mail?

For word lovers, (which I am), the term is what is called a "retronym," which is a term coined to differentiate an original term, previously used alone, from a more recently constructed term. 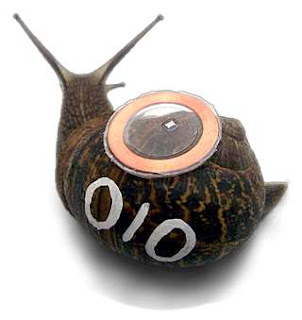 For an example, an acoustic guitar, which used to be called a plain old guitar, is now "acoustic" to distinguish it from an electric guitar. Similarly, "snail mail" as a phrase didn't come into use until the term "e-mail," short for "electronic mail,"  arrived on the scene somewhere around 1982.
Around 1983, the term "snail mail" was being slung around to describe anything that wasn't electronic.
The term was used ast least once in the 1840's to contrast the already operating postal mail with the new instantaneous telegraph. The Philadelphia North American stated "The markets will no longer be dependent upon snail paced mails".
As an aside, one clever project called "Real Snail Mail" actually fits encoded chips on the backs of snails, encodes them with electronic messages, and then tracks their progress as they "deliver" their satche.. (see project here.) Their theme is "improving slowness."
What do you think? Offended by the term? Do you embrace it? Or do you not care?
Comment here and then take our poll on the upper right corner of the blog (click here).

When it originally started I thought the USPS should run with it.Make a logo with a snail with racing strips and say"a little slower but more secure".

Those of us who consider ourselves mail enthusiasts just call the stuff delivered to our mailboxes, "mail" (although I do have other terms for the bulk advertisements). But, the snail mail images I see on stationery and other postal related items are usually really cute, so I think getting knickers in a twist about the term is rather silly.

I just worked a box of mail which comes down a debris chute at the bulk sorter. There was a mixture of first and third class mail, and periodicals. One piece was dated Oct. 09, therefore, the term snail mail actually applies in some instances.

The term doesn't really bother me, but I call hardcopy mail "Real Mail." I think the suggestion above of doing advertising pointing out we may be slower but we're more secure is a good idea. We should also point out the advantages of REAL greeting cards. I don't really like getting e-cards but prefer a real card that I can hold in my hand and keep. BTW, the "Real Snail Mail Project" is pretty clever and fun.

Originally, I hated the term, but recognize that it is here to stay. We have such a good advertising agency. We should do a commercial pointing out our outstanding "snail mail" service scores.

I HATE the term and everytime I hear those two words "snail mail" it bothers me still because people saying it do not mean it in a flattering way to the postal service. It is definitely a slam! I would LOVE to have the postal advertising department do something creative and clever so this term will make the Post Office look favorable and show all the hard, good work we accomplish everyday!

I agree with the above "HATE the term" comment. I truly detest it! If the USPS is so bad, why do people whine when rumors of 5 day delivery service surface? I keep telling people that they must use us or lose us. I guarantee that people won't know what they had until it's gone.

Most people know that if you act insulted by a term used toward you,that it will only encourage some to use it more.
Everyone has to admit we can not compete with electronic messages.
Compared to that we are at a snails pace.
So roll with it and let it bounce off you.
Make use of it by saying,we may be slower but we use real people who care about your mail service.