You know about Air Mail. Did you know that at one point we toyed with the idea of "Missile Mail?" 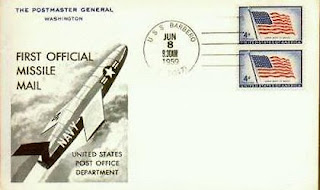 The idea of firing rockets loaded with mail started in the 1930s by missile enthusiasts who were looking for practical uses for their devices. In fact, the first successful rocket flight in the U.S. was made in 1935 and contained a "a live cock, a hen, and 189 messages in envelopes.
An idea was spawned. Could mail be delivered around the world using guided missiles?

On June 8, 1959, a Navy submarine fired a missile to reach the Naval Auxiliary Station in Mayport, Florida. The missile carried 3,000 letters.

The idea never caught on. But maybe there are other ideas out there. How do you think we should deliver mail in the future? Comment here.

When I was in grade school I was fascinated by the "pneumatic tubes" banks and some stores used to shoot money and memos throughout the building. I did a report on the future of the mail where I envisioned home mail delivery through a network of those tubes. Not sure how you cram a parcel into them, though.

We should deliver the mail via our most valuable assets -- our employees. That personal touch can not be replaced.

Delivery is the best thing the USPS does.