The latest Legends of Hollywood stamp series honors Katharine Hepburn, one of ’s most fascinating and enduring film stars.
The stamp goes on sale tomorrow, May 12,  which is also her birthday. 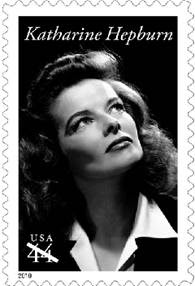 “I was taught,” she said, “not to be afraid of anything.”
She starred in more than more than 40 motion pictures, receiving 12 Academy Award nominations for Best Actress and won four Oscars, and an Emmy.
What's your favorite Hepburn movie? Comment here.

"The African Queen" made an impression on me when I was young. Katherine Hepburn was ahead of her time, a real inspiration to women with her independence and free spirit. I also think Cate Blanchet did an amazing job of portraying Hepburn in "The Aviator."

Any thing with her and Spencer Tracy!!!