Yesterday, the Scouting stamp was released, dedicated at the National Scout Jamboree in Fort A.P. Hill, Virginia.
It coincides with the 100-year anniversary of the Boy Scouts of America,
An estimated 110 million Americans have been Boy Scouts, with more than two million achieving the highest rank of Eagle Scout, including astronaut Neil Armstrong, former president Gerald Ford, New York City Mayor Michael Bloomberg and basketball Hall of Famer and former U.S. senator Bill Bradley.
Scouting runs deep in our national consciousness. Many people treasure the scouting experiences of their own past, or that of siblings, parents, or friends. What’s more, scouting calls to mind the simpler times of a nation shaped by the frontier. 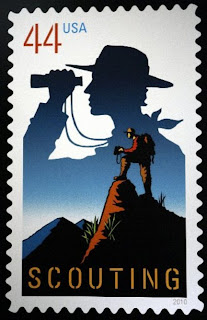 You might be asked why the stamp doesn't say "Boy Scouts." It's because the stamp is intended to to honor the youth scouting movement in America -- for both boys and girls.
Since the 80's, the Postal Service has had a policy not to honor organizations with stamps of their own -- there's just too many worthy candidates and not enough stamp issues. But they do honor "activities," and scouting falls in that category.
Click here to see a slide show of all past scouting-themed stamps.
What do you think of the new stamp? Is it selling in your office? Comment here.

Let's leave politics out of this, please. The stamps are great and should sell like hotcakes!

I like them, but I wonder why if they were meant to honor both boy and girl scouting, why when you look at them do you automatically see/think boy scouts? I wish they would have combined the two on one stamp or at least done one stamp for each club, with 10 of each per sheet.

The stamp is a great honor for Scouting!

He can't see the value of the Scouts to honor them on their 100th ! GO SCOUTS ;)