The storms that dumped up to 10 inches of rain across southern Minnesota and central Wisconsin had mostly passed by the morning of Friday, Sept. 24. But in many places, the full effects of the deluge were yet to come.
In St. Clair, MN, Postmaster Denise Gjerde noted that the nearby Le Sueur River was rising at a rapid pace. She called MPOO Mike Stevens and Pemberton OIC Natalie Schmidt to give them the news and begin planning for possible implementation of the Continuity of Operations Plan (COOP).

Sandbagging had already begun at the city’s water treatment plant and several homes in the area. By early evening a small barricade was built around the Post Office. But the waters continued to rise and the effort kicked into high gear. A troop of more than 100 volunteers descended on the Post Office, Gjerde said. Other residents and area businesses provided food and other support to keep the volunteers going. By early the next morning a wall several feet high surrounded the building.

A pair of portable sump pumps rounded out the defense, leaving the Post Office on an island surrounded by floodwaters. Because there was no access, the COOP was implemented and operations were moved to Pemberton. Gjerde, her husband, Doug, and building owner Harry Fitzloff took turns around the clock, monitoring the water level and ensuring that the pumps remained working.

By late Sunday, water had receded substantially and St. Clair was up and running again Tuesday. Damage to the building was limited to minimal water seepage in the lobby area. “I feel so good about what we were able to do,” Gjerde said. “When we take our oath, we’re entrusted with this. It’s not my Post Office, it’s everyone’s Post Office.”

The people of St. Clair have proven that point. 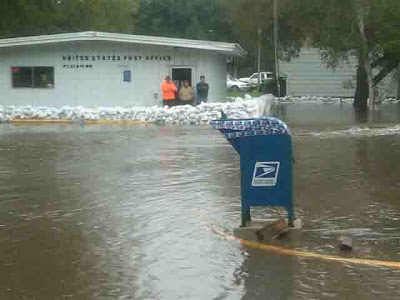 We were just through that area 2 weeks ago(my husband is from Mankato, MN). I am amazed at how they were able to save their post office because even part of the main highway was washed away and inoperable. Way to go!

Funny.....someone had to run tape around the box to tell customers not to drop mail in the box? :)