Get them while they're young!

Kremin, MT, Postmaster Lynn Melby had this delightful Priority Mail Flat Rate Box story to tell recently as related to her by nephew Jake Stuart who lives in nearby Malta, MT. Both Jake and his wife, Ashley are the proud parents of nearly three-year-old Embree and younger brother Regan.

“Jake recently called me with this cute story,” said Melby. “Jake said that their family recently had one of our Priority Mail Small Flat-Rate Boxes sitting on the counter at home. Apparently Emree was playing nearby with her big stuffed cat and soon was trying to stuff it in the Flat-Rate box. After Emree was trying to do this for a while, her Dad said to her, “”Emree that is not going to fit in the box, you are going to wreck it. To which Emree innocently but emphatically replied, "Dad, if it fits, it ships!"’

Along with showing her awareness of the popular Priority Mail Flat-Rate Box commercials, Emree comes from a postal family. Besides Kremlin Postmaster Lynn Melby, she has two other great aunts currently serving as postmasters - Patty Young, in Whitewater, MT and Karla Davison in Highwood, MT.

Photo caption: Toddler Emree Stuart of Malta, MT tried to fit her stuffed cat in this Priority Mail Small Flat-Rate Box and told her Dad, “If it fits, it ships.” 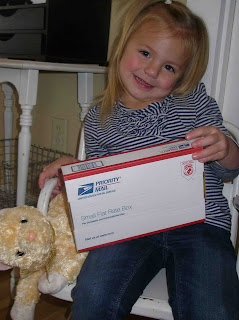 My granddaughter is now 3. When she was just over 2 I sent her a children's magazine subscription (one that she now loves and looks forward too). I also send a small parcel about once a month. The result is she now enjoys going to the mailbox to see if she has any mail. In about 6 more months I send some thank you cards and stamps so she can learn to send thank yous out.

Cute; maybe we can get her together with Al on one of our commercials!