Second job is a home run

Rob Potts has a pretty great job as Postmaster of Laurel, NJ. 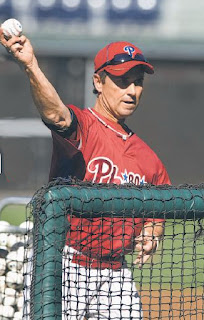 But he's not complaining about his other gig.

Potts works as a batting practice pitcher for the the Philadelphia Phillies. When they are home and playing at night, he makes the 20-minute trek down to the stadium and throws pitches to the players so they can work on their swings.

He's been doing the work for four seasons now.

A batting practice pitcher doesn't throw the ball hard, but it does have to be of a consistent speed and placement.

The Phillies have a full-time batting practice pitcher, so Potts only works with the team during home games.

The players know his other job. "Sometimes, they'll ask about area to live in or where something is," he said. "But now it's just business as usual."