Lincolnville, KS, Postmaster Connie Johnson created a parade float at home that trumpted the Postal Service . She entered it in the Burdick, KS, Labor Day parade, which had as its theme, "Happy Birthday Kansas."
On one side was the Kansas State stamp. On the other, she had a board that was painted, “Save a Post Office, Write a Letter.”
It won the "Judge's Prize," for best float in the parade.
She also took the float to Lincolnville, KS, Oktoberfest celebration on Saturday. 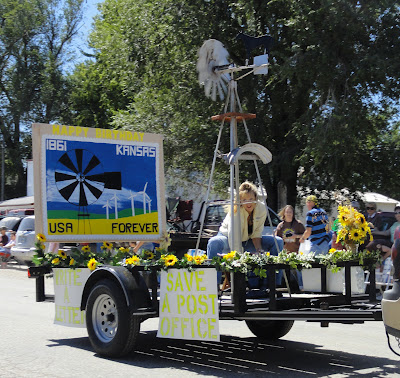 I think this is a great idea.

I commend her for going above and beyond to support the Postal Service and her community.

Well done, a true goodwill ambassador for the Postal Service.