Bone marrow donors show off the best side of USPS 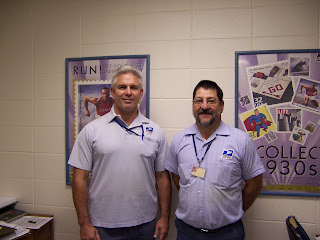 On any given day, more than 6,000 men, women and children desperately search the National Marrow Donor Program (NMDP) Registry for a matching bone marrow donor or cord blood unit. These patients have leukemia, lymphoma and other life-threatening diseases that can be treated by a bone marrow or cord blood transplant.

Jeff Wilson, a Boise, Cole Village Station letter carrier with 22-years of service, has been on the bone marrow registry since 1983. He was recently identified as a possible match. After further testing, he was determined to be the best possible match for a woman in need of a bone marrow transplant. Wilson didn’t hesitate to continue with his commitment to be a donor.
"I know the importance of being a donor. Twenty-five years ago my father was diagnosed as having leukemia and was in need of a bone marrow transplant," said Wilson. "I tested then to see if I was a match. My sister was a matched and she became the donor."
Sadly Wilson’s father did not survive, but he has remained on the registry hoping to help someone else in need.
"I had been identified as a possible match three times before, but this was the first time I was
determined to be the best possible match for a recipient. I was surprised to learn that 70-80% of donors are not related to the recipient."
Jeff was flown to a center where the procedure for removing the bone marrow was performed. He received the best care from the hospital staff that were as excited about his donation as he was.
After a few weeks, Jeff was able to return to his normal work duties. Confidentiality laws keep the name and location anonymous between the donor and the recipient. They can exchange letters through the program and after a year, if both parties agree, they can learn the identity of the other.
Chris Stoeberl is also a letter carrier at the same station and donated bone marrow six years ago. Four years ago he had the opportunity to briefly meet the woman who was the recipient of his bone marrow.
"She lives on the other side of the U. S. and was taking a vacation that she had to postpone when she was diagnosed with leukemia," said Stoeberl. "I met her at an airport in between her flights. She has been cancer free for six years!"
According to the NMDP, more than 65 patients have found their match among the USPS employees who joined the registry. Almost 60% of USPS employees on the Registry are from diverse racial and ethnic backgrounds. This is important because racial and ethnic heritage play a vital role in matching patients and donors. Tissue types used for matching are inherited and a patient is more likely to match someone from their own race or ethnicity. The commitment of the USPS to help diversify the Registry has increased the likelihood that all patients will find a life-saving match.
Click here to learn more about the National Marrow Donor Program and the USPS partnership.