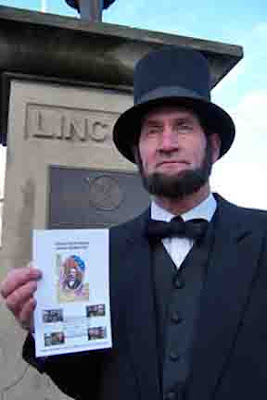 Boise Customer Relations Coordinator Sue Calvin worked with the commission and the Eagle Stamp and Postcard Club to provide the pictorial postmark commemorating the event. Calvin designed the postmark that was used to cancel the four new Abraham Lincoln Bicentennial stamps for the hundreds of people seeking souvenirs of the historical event.
David Leroy, chairman of the Idaho Abraham Lincoln Bicentennial Commission and a former state attorney general and lieutenant governor, thanked the United States Postal Service – for their presence and for providing the pictorial postmark – as he addressed the thousands of attendees that braved the cold to witness the unveiling and rededication.
The monument pedestal was originally dedicated on February 12, 1915. The "Lincoln the Emancipator" statue, created by Ohio sculptor Alphonse Pelzer, was placed upon the pedestal several months later when it finally arrived in Boise. Another dedication ceremony was held in July of 1915.
As part of the Idaho Abraham Lincoln Bicentennial event, the monument was moved from its former place on the grounds of the Idaho State Veterans Home to a more prominent place in front of the State Capitol building. The monument was also restored with money raised by Idaho school children that held a "Lincoln penny" drive that totaled 325,000 pennies.
Boise resident Skip Critell is a Lincoln impersonator and he is shown above holding a souvenir card with the Abraham Lincoln Bicentennial stamps and pictorial postmark.