Littleton, CO Ken Caryl Station Carrier Kevin Smith has a reputation for giving top service and for being greatly appreciated by his customers. I can see why based on his extra diligence recently.
Smith was delivering a package to an elderly customer. His knock on the front door was answered by the customer who called out that she had fallen and couldn't move. Kevin came around and entered in the side door.
Kevin found her lying on her couch. He helped her sit up and gave her water. Feeling that Sallie was probably okay, Kevin left to finish his route. But several hours later, he returned to check on her. Smith again found her lying down and having great difficulty.
The customer loves her carrier. "He’s wonderful. I hope the Postal Service doing something special for him. I thank Kevin and God that I am here today".
Well, Benny agrees and Kevin gets a big salute. I passed his name on to the PMG and he'll be getting something from the big guy. 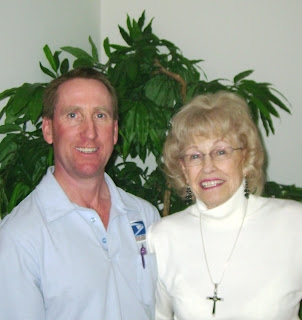 Littleton Ken Caryl Station Carrier Kevin Smith with the customer who's life he may have saved through his quick thinking.

He's awesome carrier! I used to work with him!

Mike the Mailman now in California