Toy Story 3 uses power of USPS -- to infinity and beyond

The movie doesn't open until June 18th, but there's already plenty of hype surrounding the third installment of the Toy Story movie franchise. 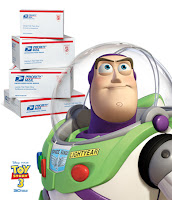 The Postal Service and Disney Pixar have joined forces and a series of advertisements promoting Priority Mail can be seen all over.
The ads cleverly incorporate Al the Mailman, who has been the star of our Priority Mail campaign, and the Toy Story characters.

Have you seen any of the ads? What do you think about the lobby displays? Will this help Priority Mail? What do your customers think?

The ad is cute. I like it. Upbeat and it will reach kids as well as business people. Now...did we also get a priority box to show up somewhere in the movie?

I love this ad! It is cute and our younger folks can relate to it! Keep up the good work!!!!!

I love the commercial! Using the pig was perfect considering it's Cliff, the mailman, from Cheers!

I recently saw the ad and my favorite character is the pig. Keep up the good work.