Mail Carrier and Dog Team Up 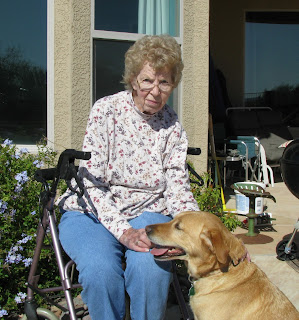 While the common view is that mail carriers and dogs are mortal enemies, they may team together when the cause is right.

Echo, MN, rural carrier Stan Boushek was delivering his route when he noticed a customer lying on the ground with her dog at her side.

Erma Iverson, who has Parkinson’s Disease, had fallen the previous afternoon while reaching to pick up a branch. Unable to get back to her feet. She had seen the minutes stretched into a long chilly night.

Iverson said she only heard 3-4 cars go by, but none of them noticed her. All the while her dog Crackers remained at her side, except to chase away some coyotes during the night.

Time and the cold took their toll, and Iverson was severely dehydrated by the time Boushek arrived shortly after noon the next day. “I got a hug from him,” she said later. “He’s a real good mailman.”

She asked Boushek for some help standing. He instead called for an ambulance, and waited with her until paramedics arrived. Since he is also a volunteer fireman, he was able to help load her into the ambulance.

Iverson was hospitalized for nine days but is doing fine thanks to the unlikely alliance of her mail carrier, who found her, and her dog, who remained at her side throughout her overnight ordeal.

Dogs really are man's -- and woman's -- best friends. But a vigilant mail carrier can run a close second.

Kudos to the dog and the carrier !