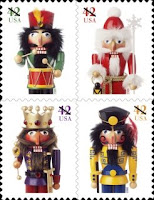 Carved nutcrackers were made in England and France as early as the 1400's, but the brightly carved ones now associated with the Christmas season were first crafted by German woodcarvers in the early 1800's. At first they were not associated with the holiday, and the 1816 publication of "The nutcracker and the Mouse King" by E.T.A. Hoffman was a dark tale not meant for children.

A friendlier adaptation by Alexander Dumas Pere was set to music by Peter Tshaikovsky and premeired as a ballet in Russia in 1892. In 1944 the Nutcracker was first performed in America by the San Francisco Ballet and ten years later the New York City Ballet presented it with new choreography by George Balanchine. Now it is America's most-performed ballet, making the nutcrackers collectibles and many are decorative only.

Glenn Crider is a rare craftsman who creates the nutcrackers from start to finish. He was commissioned to make the four that appear on this year's holiday stamps.

What do you think of the nutcrackers? Do you have a memory of one?