Dogs are a safety concern for postal carriers on nearly every route in America. And, when a canine problem persists, delivery can be curtailed to a home or a neighborhood.

But leave it to an Alaska rural carrier to contend with bears on his delivery route.

Paul Tomaro works out of Juneau’s Mendenhall Station. He has spent most of his 26-year postal career on the same route. Although he sees bears often, Tomaro doesn’t pay much attention to them. They leave him alone and he reciprocates.

But he recalls one occasion when he was falsely accused for a bear’s mischievous ways. “As I drove up to the customer’s mailbox, I saw a 300-pound black bear banging on the customer’s garbage can,” he said. “The contents were all over the ground.” 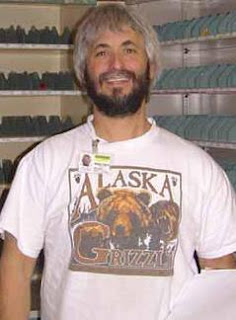 The bear saw Tomaro and ran away. The customer heard the commotion and saw Tomaro’s vehicle suspiciously close to the mess. “She saw the garbage on the ground and accused me of hitting the can with my vehicle,” he said.
Tomaro explained the situation and suggested the bear was still nearby. The customer made a hasty retreat indoors.

Dealing with the weather can be a “bear,” too. Tomaro has two Jeep Cherokees he uses on his 23-mile daily route. The four-wheel drive vehicles serve him well during Alaska’s frigid winters. Three years ago, he contended with 500 inches of snow over the winter. “The roads are usually cleared of snow, but I have to drive on the shoulder to make my deliveries and that’s where the snow piles up,” he said.

At least Tomaro doesn’t have to cope with the bears during the winter. They’re smart enough to stay undercover in hibernation until the temperatures increase.

We don't have any carriers, but we have bears. We have a detached box unit. I got a call that the place was a mess. I checked it out, a bear had gotten in and couldn't get out. It has clawed the facing off the door, used the place for a bathroom, and messed up other lobby furniture. I was just glad that it was gone when I got there.

In the lower 48...our carriers carry dog spray. Do they carry bear spray up there? :) Probably have seasonal "bear warning" safety training too.