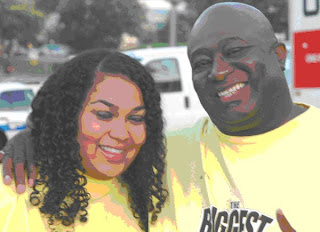 O’Neal and SunShine are competing with 10 other overweight couples to achieve the greatest percentage of weight lost during the course of the show.

In their first physical challenge, the Hamptons competed to outpedal other teams, including identical twins who collectively weigh nearly 1,000 pounds. But the main focus of the show is not the contest itself, as competitors receive the help of physical trainers, nutritionists and other medical personnel to achieve their weight loss goals and build a new, healthier lifestyle.
What do you think? Comment here.

We'll be watching. Takes courage to do this!

Good Luck to them! Most of us are struggling with a weight problem, whether it be 10lbs or 100lbs. This is a great time to start challenging one's self to achieve your weight goal.

I think it is great that they are trying to improve themselves.

It's great that the Hampton's are doing this together; support from your family is so important when trying to lose weight. I've struggled with my weight all my life and I'll be rooting for them. They'll be an inspiration for us all to be adopt healthier lifestyles.

Good luck to both of them and I hope they reach their goals.

I don't usually watch The Biggest Loser, but I might just tune in to cheer them on!! :)

I'll be rooting for O'Neal and Sunshine when they get back on the show, like I know they will!

Good Luck to them. Their challenge is not just losing the weight but keeping it off the rest of their life. Big life challenge.