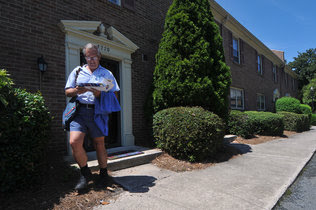 Bob Smith is a letter carrier who moonlights as an author. He has sold more than 60 stories and published two novels. And in 2009, a Hollywood producer bought the rights to his first book, "The Flock."


He crafts tales of zombies, ghosts and 10-foot-tall carnivorous birds who are alive and well. His obsession with fantasy, horror, and science fiction began when he was eight years old.  His mother - who owned a used a bookstore with his father - handed him a copy of Ray Bradbury's "The Illustrated Man."

Along the way he's gotten hundreds of rejections. His stories include "Visitation," which tells of Edgar Allan Poe returning from the dead to meet an admirer. It took him 18 years to sell the Poe story. He advises other authors to stick with it.

He doesn't plan to quit his day job soon. But in the meantime, the fellow making his mail rounds in Charlotte might also be plotting his next novel.

I MUST share this story with my two teenagers...my daughter is an aspiring author and my son loves stories about zombies! I'm thinking I might have to look up some of Mr. Smith's work to share with them.