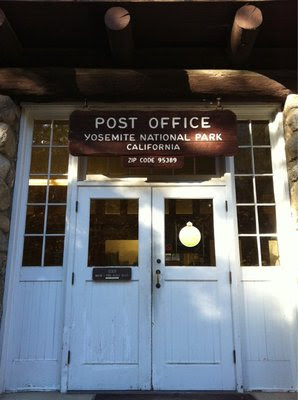 Built in 1925, it has received recent renovations including new wood siding, along with shake shingle roofing and a renovated woodwork interior. It's all part of the park’s efforts to maintain and restore historic buildings. The renovations were funded by the National Park Service.

The Post Office, which features stone on the lower level and wood shingles on the upper level, is an excellent example of rustic architecture, and was designed by Gilbert Stanley. This type of design became popular at other national parks throughout the country.

Through the years, four stamps have been issued with Yosemite themes. A one-cent El Capitan in 1932, a 25-cent Flag Over Half Dome in 1988, a 39-cent Yosemite Waterfalls in 2006, and a 42-cent painting by Albert Bierstadt of Yosemite Valley in 2008.

Since it has been recently renovated it should sell rather quickly....that is the game plan right? If you are going to close 250 processing plants and numerous small offices in rural communities across America then this one would have to go as well....yes?

re: comment above...
Too logical for the USPS to understand...

I am sure it has no more value to our employer than any of ours do. Sad state of affairs we are in. :(

Maybe we should forward this story to HQ.....so they can see that even the National Park Service thinks the post office is worth retaining!!

Historical places and structure worth to be preserved to retained its full value. When restructured it changes the original meaning of being a historical thing.