The nation's Food Banks are now breathing easier thanks to the efforts of 1,300 Post Offices and employees thanks to the 2008 NALC Food Drive.

A Record 73.1 Million Pounds of food were collected from customers who were more generous than ever. It breaks last year's record by a whopping 2 million pounds.

The food was delivered to local food banks, pantries and shelters to help needy families in all 50 states and U.S. jurisdictions 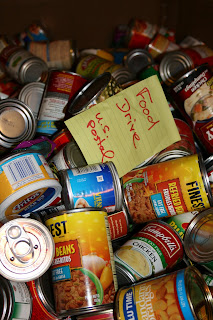 NALC President William H. Young thanked the millions of American families who left food by their mailboxes and the thousands of letter carriers, rural carriers, and other postal employees and volunteers who collected, processed, and delivered the donations to local food banks and pantries.

"It is heartwarming that in these difficult times, when all families are feeling the effects of high food and gasoline prices, that so many Americans put aside their own financial concerns to help others facing hard times,” Young said. "They should be applauded for their generosity toward millions of needy Americans – including many working families, children and the elderly.”

Benny adds his applause to all who were involved.