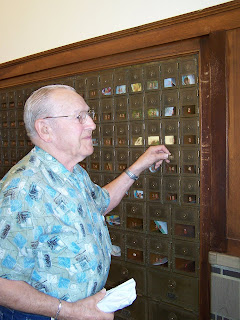 In 1942 a young Todd County, MN farmer was called to serve his country in WWII. He held an auction to dispose of his property and headed to the county seat of Long Prairie. There he rented a Post Office Box in the modern new (built in 1937) Post Office, before he left for war.

Fast forward to 2008 and this 87-year old Norm Kitzman is renewing the same Post Office Box he’s held, continuously, for the past 66 years! He’s worn out 2 keys for Box 14 in those 66 years!

Norm was one of the first veterans in the area to return from the war. That was because he was wounded in action in Germany; taking a bullet to the hand.

When he returned home from the service, Norm took a job as a rural sub at the Long Prairie Post Office.

Some days Norm would have to deliver two routes in one day; delivering the route west of town in the morning and the route south of town in the afternoon. He recalls that during the Christmas season there were days he came back with more packages than he took out, as his appreciative customers lavished him with gifts of butter, eggs, and sausage from their larders.

Norm also worked as a clerk in the office before he left to work for a promising new print shop – Harts Press (now known as RR Donnelley).

I gave my box up in 1797. I should have kept it! Know of any other long-term Post Office box holders?