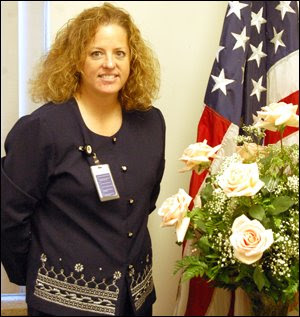 Brighton, CO, Postmaster and U.S. Army Master Sgt. Karren Buchanan is back in her office after returning from a 15-month tour of duty in Iraq.

Buchanan is Brighton’s Postmaster, but she is also a 23-year veteran of the U.S. Army. She was stationed in Numiniyah, Iraq, about 80 miles southeast of Baghdad.

She trained, coached and mentored Iraqi Army soldiers on managing their supply systems. She was in a serious attack as well, which earned her the Combat Action Badge. The CAB is awarded to soldiers who are in hostile areas and perform well while engaging or being engaged by the enemy.

In addition to the combat award, Buchanan also received another high military honor -- the Bronze Star.