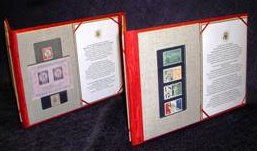 In March, the Queen of England gave French President Nicolas Zarkozy, who is an avid stamp collector, proofs of the 2004 stamp issue celebrating the 100th anniversary of the Entente Cordiale agreement between France and Britain.

During a European tour in June, President George Bush met with President Zarkozy. The two presidents also exchanged gifts: Sarkozy gave his guest a luxury Hermes saddle. Bush gave his host a set of rare US postage stamps bearing the Statue of Liberty, the original was a gift from France to the United States.

Back when I was the first Postmaster General I never dreamed the postage stamp would become a collectible. But I do like the idea. You can learn a lot from a little postage stamp -- just ask President Zarkozy!