In my book, the turkey reigns 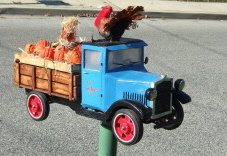 This mailbox is loaded up for Thanksgiving -- complete with pumpkins in back and a turkey on top!

Though we now have a tradition of eating the turkey on Thanksgiving, at one time I tried to get him named as the national bird. (See my previous discusson on my vain attempt to replace the postal eagle with a turkey here. Also read about an attempted postal coup by turkeys here, here and here.)

I once wrote this about the turkey: "For truth, the Turkey is in comparison a much more respectable bird, and withal a true original native of America . . . He is besides, though a little vain & silly, a bird of courage, and would not hesitate to attack a grenadier of the British Guards who should presume to invade his farm yard with a red coat on."

But did anyone listen to Benny? Is anyone listening now? Send me a comment on what you think about the turkey.

However you observe the holiday, remember to count your blessings in some way and Have a Happy Thanksgiving!

Sorry, Benny, I have to agree that the Eagle is a much more majestic bird!!