Delivering when the heat’s on 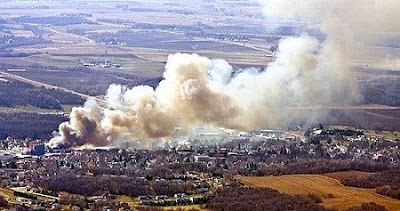 When flames engulfed a food processing plant and threatened to ignite 30,000 pounds of ammonia stored at the facility, a mandatory evacuation was ordered for St. Charles, MN, a community of 3,600.

The evacuation order meant the Post Office had to pack up quickly and go, too. The two city carriers had completed their routes, but rural carriers had to be directed to Dover, five miles away, after they finished deliveries. Outgoing mail was also transported to Dover and the evening’s transportation schedule changed.

Word came later that evening that the evacuation would remain in effect through at least the next morning. That meant that everyone would have to work out of the much smaller Dover office. Fortunately, Mother Nature cooperated. “We took advantage of a beautiful Saturday morning and cased our mail outside in the loading area,” said St. Charles Postmaster Laurie Bergey. “We had sunshine. We had donuts. We had it made.”

At 10 a.m., the carriers were allowed back into St. Charles, a half-hour ahead of the rest of the town. The mail was delivered without a hitch, a happy surprise for many residents who weren’t expecting delivery to return until Monday. “We really didn’t feel like we were doing anything out of the ordinary. Everyone just worked great together and kept in touch via cell phone throughout the whole ordeal,” Bergey said.

If the public-at-large only knew how dedicated their mail carriers are on a daily basis,not just when crisis arises.