Salt Lake City P&DC Registry Clerk Robert Ladmirault will retire from the Postal Service this week after 52 years with the Postal Service. A retirement party was held on the workroom floor to celebrate his career.

Ladmirault was one of many postal employees whose lives were turned upside down in 2005 by Hurricane Katrina. At the time he was a Registry Clerk at the New Orleans P&DC.

He survived Katrina’s floodwaters by climbing into the attic and roof of his house where he was rescued 24 hours later by a Sheriff in a boat. The Sheriff dropped Ladmirault off on an Interstate 10 overpass where he spent two days before being taken to the New Orleans Convention Center for four days. He then boarded a plane and was evacuated from New Orleans. To his surprise the plane landed in Salt Lake City where he stayed at a local Army Camp. 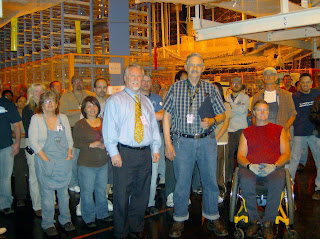 He eventually found an apartment and employment at the Salt Lake P&DC. The Louisiana native liked living in Salt Lake City so much he decided to stay. “What I like best are the people,” said Ladmirault. “I can’t believe what a great bunch of guys I work with. They are dedicated and work as a team.”

At his retirement celebration, Ladmirault talked about how much the Postal Service has changed during his career and what great memories he will take with him. He plans on buying a house in Utah and beginning a new chapter in his life, which will include traveling.

What a good person with a great story. So that's how someone ends up in Salt Lake City. Seriously, it is nice to see this dedicated effort being recognized by his fellow workers, his district manager, and the postal service!