The Priority Mail Flat-Rate Box t-shirt is not only a great advertisement for the Postal Service, it’s also tough as iron. 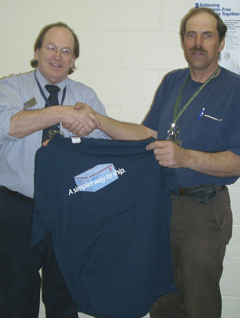 Loch is a rural carrier at the Watkins, MN Post Office. One evening he went to his second job hauling livestock to market without changing out of his “A simpler way to ship” t-shirt. That night a belligerent cow decided she was happier on the farm and bolted back down the loading ramp. Loch tried to stop her without much success. The cow knocked him over and stomped on his chest, square in the middle of the Priority Mail box.

Loch suffered two broken ribs and his heart and lungs were bruised. When the paramedic tried to cut his t-shirt off, Loch protested “No way. I can’t replace this shirt.” In spite of the pain, he got up and gently peeled the t-shirt off.

As it turns out, the shirt could be replaced, courtesy of Northland District customer relations manager Jennie Clark. Loch’s original t-shirt is enjoying a well-deserved retirement.

But what about the cow? “She was too big to fit so she did not ship,” Loch says.