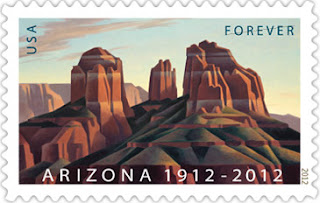 With the issuance of this stamp, the U.S. Postal Service commemorates the 100th anniversary of Arizona’s statehood. One of America’s last frontiers, Arizona became the 48th state in the Union on February 14, 1912.

Congress made Arizona a U.S. territory in 1863, but achieving statehood would take nearly 50 more years. Today, more than six million people live in Arizona, home to 21 Native American tribes with ancient connections to the land. About a quarter of the state is set aside for Indian reservations, including the Navajo Reservation, the largest in the United States.

The “Grand Canyon State,” is known for its stunning beauty and abundant natural resources. The stamp art celebrates this beauty with an original painting of Cathedral Rock, one of the colorful and much admired sandstone rock formations of Sedona, Arizona. Stamp artist and Phoenix native Ed Mell is well known for his distinctive modernist renderings of the Southwest desert landscape.