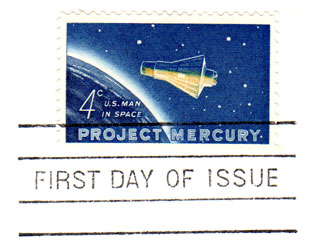 Fifty years ago John Glenn was the first American to orbit the Earth. As soon as his Mercury spacecraft Friendship 7 safely splashed down, the news of his historic mission was recorded across the nation by U.S. Post Offices.

For the first and only time in the country's history, the United States Post Office Department surprised the public with the release of a secret stamp celebrating Glenn's successful mission. The 4-cent "Project Mercury" postage stamp was revealed and immediately put on sale in 305 post offices within an hour of Glenn's triumphant return to Earth at 2:43 p.m. EST on Feb. 20, 1962.

The stamp was officially kept secret in case the mission failed. The call from Washington to put them on sale came at 3:30 p.m. EST. For Post Offices on the East Coast, such as Boston, that meant that customers had only a few hours before the offices closed to obtain first day postmarks. The most time was afforded at the station farthest west, Honolulu, Hawaii, where the stamps were released at 10:30 a.m.

As news of the stamp spread, the public began lining up at Post Offices to get them.  By the end of the first day 10,290,850 of the stamps had been sold. By the time the stamp was withdrawn from sale on June 6, 1962, more than three million had been postmarked on collectors' envelopes. At least 250,000 of the stamps were canceled at the official Cape Canaveral station.

For his part, John Glenn says he does not remember how he first learned of the stamps or where he first saw them. But he is very familiar with them now. "I have certainly seen enough of them since then," Glenn told collectSPACE. "I've signed thousands of those things."

Without a way to coordinate nationwide, collectors couldn't know if such "first day covers" existed for all 305 stations. To this day, 50 years later, as many as 20 cities are still missing examples. To see a list of missing cities visit: http://www.collectspace.com/news/news-022012a.html