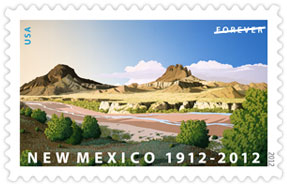 This stamp was issued Jan. 6 in Santa Fe, NM, in observance of the Centennial celebration of New Mexico statehood.
One group, among many, who decided to do a little extra to celebrate was the New Mexico Council of the Navy League of the United States. This civilian support organization took the opportunity to highlight the USS New Mexico submarine by having it carry some special mail onboard. The "submarine mail" now makes a commemorative collectable.

The USS New Mexico Committee designed and produced a special cachet cover that features a photo of the submarine underway, and the commemorative postage stamp. It also features an insert with information about the Navy's 6th Virginia-class submarine and a special USPS-approved cancellation postmark.

The cachet envelopes were then overnighted to the Chief of the Boat, ETCS Eric Murphy who took them to sea.

The Commanding Officer, CDR George Perez, signed each cover, thereby certifying that each has been carried beneath the sea aboard USS New Mexico.


For more about the USS New Mexico visit the website:  http://www.ussnewmexico.net/