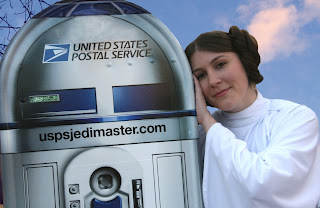 In the , Royal Mail has recently honored its Team Great gold medalists in the Olympic Games by painting a collection box gold for each gold medal won. It’s a positive way to show the spirit of pride for members of the community that have excelled in great achievements.

Changing the paint scheme of collection boxes for certain events or individuals isn’t something new. In 2007, the USPS graced many of its boxes with the likeness of R2-D2, the famous droid from the Star Wars movie franchise. The temporary makeover sparked great interest and enthusiasm for fans of the poplar character as well as the Star Wars themed stamps issued that same year.

Alteration of a collection box skin doesn’t occur with great frequency, however. The standard blue design is seen as the beacon of an institution that stands behind its “We Deliver For You” motto. As prominent as these stalwart boxes are, a temporary makeover isn’t completely out of the question as a possible promotion campaign for a new Postal Service product release.

If a new promotional skin were to be developed for collection boxes, what do you think that design should be?