After 38 years, Kansas City Box Section Clerk Raymond Teat finally got his Purple Heart.
As a private first class in the Army's 25th Infantry Division serving in Vietnam, he was severly injured by a rocket-propelled grenade.
In a ceremony earlier this week, he received his medal thanks to some perserverance by his postal supervisor and help from Congressman Sam Graves.

The missing medal wasn't the only snafu. According to the Kansas City Star, he was sent home by Army medical authorities. But they weren't familiar with postal state abbreviations and Teat ended up in Montana instead of Missouri. He did eventually get back to the Show-Me state.
A big Benny salute to Mr. Teat and all the other USPS veterans who have defended this great nation. Your sacrifices are proof that that what we did 232 years ago was worth it. America - an enduring beacon of hope. Best Memorial Day wishes to all.
Kansas City Box Clerk Raymond Teat with his wife, Cathy.
See news coverage of a Kansas City ceremony honoring five employees who are Purple Heart recipients here and here. 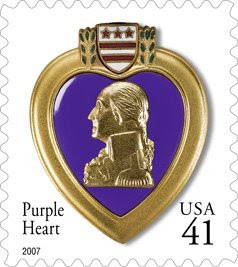