Mail carriers in a Madison, WI, neighborhood are facing off against wild turkeys who are pestering carriers out on the route.

Customer Services Manager Mara Wilhite said carriers have been attacked by as many as ten different birds, including one that blitzed through an open door of an LLV with talons raised.

Eric Lobner from the State Department of Natural Resources speculates that the mating birds are attracted by the trucks red, white and blue coloring.
I believe these attacks have nothing to do with mating habits. Rather, they are all about "eagle envy," and no other organization better symbolizes the eagle than the U.S. Postal Service.
All of this could have been avoided if somebody would have just listened to me when I proposed that the national symbol be a turkey instead of an eagle. I wrote to my daughter about this very subject in 1784.
"For my own part I wish the Bald Eagle had not been chosen the Representative of our Country. He is a Bird of bad moral Character. He does not get his Living honestly. You may have seen him perched on some dead Tree near the River, where, too lazy to fish for himself, he watches the Labour of the Fishing Hawk; and when that diligent Bird has at length taken a Fish, and is bearing it to his Nest for the Support of his Mate and young Ones, the Bald Eagle pursues him and takes it from him....
"I am on this account not displeased that the Figure is not known as a Bald Eagle, but looks more like a Turkey. For the Truth the Turkey is in Comparison a much more respectable Bird, and withal a true original Native of America . . . He is besides, though a little vain & silly, a Bird of Courage, and would not hesitate to attack a Grenadier of the British Guards who should presume to invade his Farm Yard with a red Coat on."
How about it? Perhaps we could change the postal eagle to the postal turkey! Click here and drop me a note. Tell me what you think! 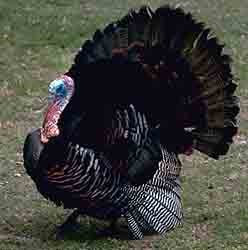 I don’t think having the turkey as our National symbol is quite as noble as our fierce eagle. I can foresee a lot of late night jokes via Jay Leno, David Letterman, and Jimmy Kimball. I take pride in my 38 ½ years of service, and I would love to keep it that way!!

I personally like the postal turkey idea. It's kind of a double entendre but in a fun way. The turkey represents a lot in our history and has the backing of Ben Franklin no less. What more legitimacy does he need.