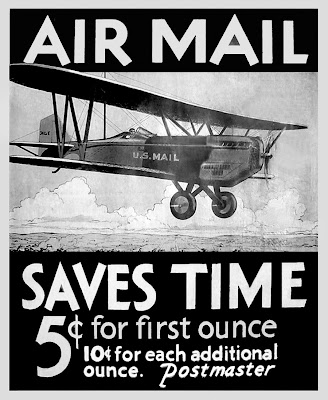 The Antique Airplane Association is sponsoring a Fly-In to commemorate the 90th anniversary of air mail service in the United States.
The Fly-In theme will honor the pilots and airplanes of the early air mail service. Hundreds of antique airplanes will fly in to Antique Airfield near Blakesburg, IA.
A cross country journey will start at New York's Republic Field on Long Island on Sept 10. It will make stops in PA, OH, IL, IA, NE, WY, UT, NV and end up at San Francisco's Hayward Airport on Sept. 13.

Here's a map of the route:

Read more here.
Airmail made a big impact on the nation. Eventually passengers hitched on to airmail planes, starting the airline industry. United Airlines first got their start as an Airmail carrier.