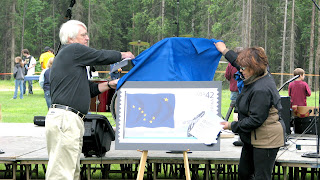 Alaska held a special ceremony unveiling the new Flags of Our Nation Alaska stamp on July 9, 2008 during an Alaska Flag Day event in Anchorage.

The ceremony was held in conjunction with Alaska Children’s Services' (ACS) observance of that special day. Shown in photo is ACS CEO Jim Maley and Alaska District Manager Dianne Horbochuk.

In 1927, Alaska territorial governor, George Parks held a contest among school children to design a flag. Benny Benson (another good Benny!), whose design was selected as the winner, was a resident of the Jesse Lee Home. After the 1964 earthquake, the Jesse Lee Home moved to Anchorage and became part of the Children’s Services.

After Horbochuk and Maley unveiled the Alaska State Flag stamp, the artwork was presented to ACS for their continued efforts in working with Alaska’s children and their involvement with the Alaska Flag Day celebrations.