Everyone loves a parade

The float was themed around the recent Simpsons stamp release. Each Simpsons character had something to say about the Postal Service. 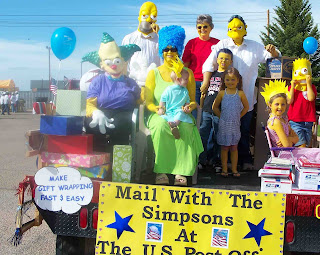 Lisa said “These flat rate boxes are great for books” while Moe the bartender carried a beer box stating “This may be good, but not for shipping.” Homer declared “Doh, I don’t want this for my passport photo” while Marge told all to “Lighten there load with Click N Ship.” Bart informed parade goers to “Ship Razor fast with Express mail.” Finally Crusty the clown showed off some of the ready post packaging supplies stating “Make gift wrapping fast & easy.”

The Post Office made a big impression on this little town.