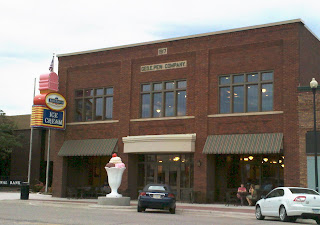 Here’s the scoop… Le Mars, Iowa is the "The Ice Cream Capital of the World". Officially designated as such in 1994 because more ice cream is produced there than in any other one city in the world.

So you see things like the large ice cream sundae that sits out in front of the Blue Bunny Ice Cream Headquarters. There are also ice cream cones appearing all over the city as part of a public art project.

Presently, there over 20 cones in places ranging from the elementary school to the truck wash. And now there is one at the Le Mars Post Office. 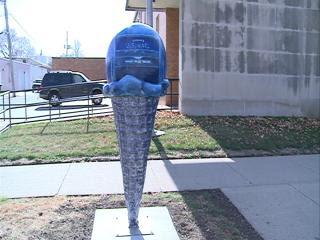 This cone was created by the family of longtime carrier Pat Holton who died earlier this year. Pat carried the mail along rural routes for 37 years. His son painted the cone the color of a drop box, and gave it great detail.

Pat's wife Karol said, "I just want people to know how much he loved his work, and the community."

To see more including a video of the postal ice cream cone visit:
http://www.ktiv.com/story/16079149/sweet-treat-with-special-meaning-honors-late-mailman

Something you don't see everyday!!