"Show Me" Sales in MO 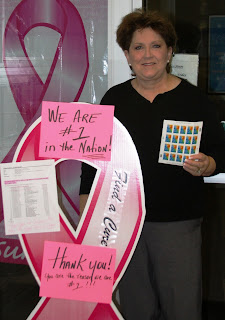 It could be "show me the money" or just plain show some breast cancer research support for Ellington, MO, Postmaster Marla Shipman.
Marla, a breast cancer survivor herself, is among the most ardent supporters of the Breast Cancer Research (BCR) stamp. This year her office led the nation by selling more than $39,000 worth of BCR stamps during October, which is National Breast Cancer Awareness Month.
The employees of the Carl Junction, MO Post Office and the Glenstone Branch of the Springfield, MO Post Office also contributed to the cause by selling more than $25,000.

In addition to using stamps to commemorate people, events and places, the Postal Service issues semipostal stamps to help fund causes mandated by Congress. The BCR semipostal was issued in 1998, and was the first semipostal in U.S. history. Sales of more than 919 million BCR stamps have raised $72.7 million for research.