Hot Air in the Mail Stream 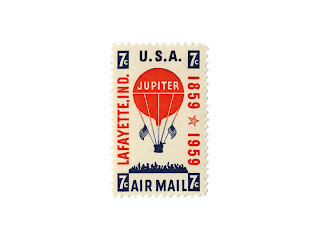 In an early attempt to deliver mail by air, professional balloonist John Wise climbed aboard his trusty airship on a windy day in the summer of 1859 and sailed off from Lafayette, IN, with the intention of travelling east to New York City. His precious cargo consisted of 123 letters from Lafayette’s citizens tucked safely inside a locked mail bag aboard his small craft.

While the attempt showed great promise in delivering mail more expediently through the air, the winds of change did not favor the stalwart balloon as the much needed gusts grew eerily still. Unable to latch onto a favorable draft, Wise had no choice but to land his airship 30 miles south of Lafayette.

Though his short voyage was unsuccessful in delivering the mailbag to its intended destination, the Postal Service dutifully transported the 123 letters safely via train to New York City. In 1959, 100 years after the attempted airmail flight, the Postal Service celebrated the event by issuing a commemorative seven-cent stamp depicting the Jupiter balloon soaring above a cheering crowd of spectators.

Do you think balloons could be a viable option for delivering mail in the future? Comment here.

With all the emphasis on "green energy", we should give it a try. After all, we'd have an endless source of hot air coming out of HQ!!